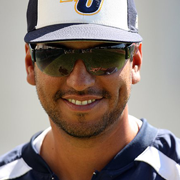 Ruben Corral is the owner and president of Lifeletics Baseball and the Head Coach of the OC Xtreme Baseball Club.  He has coached at the high school level at Capistrano Valley High School, JSerra Catholic High School and Vanguard University and has been a baseball performance instructor for over 20 years.

Coach Corral’s organization has placed 19 seniors into colleges over the last three years and over 60+ of his players in the last 10 years are played college and professional baseball.

Ruben was recruited out of Arroyo High School in El Monte, CA by the defending College World Series Champion Pepperdine University and drafted by the reigning World Series Champion Toronto Blue Jays in the 10th round in 1993.   He spent 5 years in the Blue Jay organization learning from one of the best minor league programs in all of baseball.