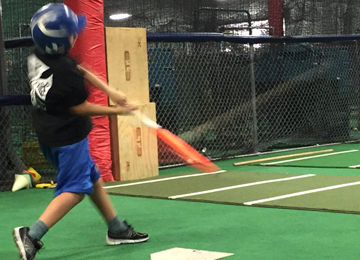 Hitting mechanics are defined by me as the body’s proper physical movement to maximize their ability and strength to hit the ball perfectly. Once a hitter’s mechanics have been established and trained, my next purpose as a coach is to find holes in the swing. There’s no better way to do this than actual game simulated batting practice.

Using our Hit Trax Hitting Simulator, the boys get in the cage with a purpose. Their job is to beat me. My job is to beat them. We’ll go through different scenarios from throwing obvious pitches in obvious counts to pitching backwards or any different combination of patterns to try and throw them off. At 45mph from approximately 30ft, my pitches simulate an 80mph thrower, giving them about .47 secs of decision making time.

The Hit Trax shows where the ball was hit and calls the balls, strikes and whether the ball was caught. Coaches without a Hit Trax can use different methods of determining hits and the strike zone. The important part here is that hitters begin to seek pitches they’re looking for, lay off pitches they don’t want and begin to understand their zones and how to battle in the box.

Training in game simulated practices help so much with so many different facets. Aside from trying to find holes in a hitter’s mechanics, it trains their reactions to multiple pitches in multiple locations, their ability to understand situational hitting, trains power, aggression and focus and most importantly, it trains a hitter mentally.

Hitting is so failure-oriented its easy for hitters to lose aggression and focus not just throughout a season, but also during a game and even during an at bat. A count that falls out of a hitter’s favor can put him in a bad mental state for the rest of the at-bat. The key to drive this out of hitters is to experience competing in as many at-bats as he can get. The volume of competitive situations will give them experience competing on every pitch.